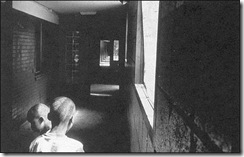 Often elder blacks speak about the ‘good old days’. They blush as utopia atmospheres bellow from their imaginations to describe a time once lost. The metaphor described a ‘village’ environment where everyone helped raise, nurture, and love black  children.  Mrs. Jones’ kindness and supervision is an example they speak about, she was a second mother to me. As a result, I was unwilling to misbehave from a fear of shame and embarrassment not physical punishment. I loved her and disappointing her was identical to hurting my biological mother.

An Indignity of Humans

Growing up in the 70s amongst poverty and collective degradation impacts one’s life in many ways. As mentioned, Mrs. Jones’ kindness influenced my life in positive ways. Nevertheless, isolation in densely concentrated areas with economically constrained people also influence one’s moral fiber in negative manners. Unbeknownst to young malleable minds adult traits are affecting their development in not-so-good processes. In other words, our experiences regardless of normalcy or maladaptive in the village impact us.

One black village’s attribute that dwarfed my development was

violence.  Physical viciousness was an acceptable form of behavior in the hood. Fighting and being incredibly brutal was a preached norm by family and friends alike. You were encourage to build a reputation through fighting. In addition, aggression in the form of ‘whipping’  by parents to correct misbehavior was commonplace. In fact the majority of my friends’ parents or single parent subscribed to identical ideologies, “Get out of line whip his ass where he stands.”

An old African or biblical proverb ‘spare the rod spoils the child’ appeared to be the punishment paradigm. The epidemic of physical beatings as a corrective device has a long history with blacks. However we are learning misguided cultural or religious creeds send a deadly signal to indelible minds.  The homicide rate among young black males are frightening.  Death on the streets have become an institution of higher learning.  However like school many do not graduate.

Young black boys like myself was all to willing to demonstrate brutality also as men. Remember we were raised to physically fight; as a result the straps on our naked ass may have created insensitivity to aggression.  After countless hostile recollections that haunted me; my vicious psyche was deconstructed a few years ago. Sadly in those memories were violent intentions meant to seriously injure or kill the person; literally. I am ashamed how a (Village) raised its children to fight where homicide became the educational norm.

"We Remember Those In Prison"

Some say I was born high. Others say i'm just simple :)

THE MIND OF RD REVILO